My uncle Edo, the eldest son of Johannes Jagtman (grandfather Bom) and Nicolette Jagtman Vosmaer (grandmother Moes) was born on Sunday the 25th of April 1915 in Batavia, now called Jakarta. His brother uncle Clem on Monday the 10th of April 1916 in the Pavilion in Laan Canne 9. The pavilion was a kind of veranda at the house.

Laan Canne was probably named after an assistant president of Batavia, Mr C. Canne. The current name of this avenue is Keshatan which means health.

Johannes Jagtman was called Bom because he was quite chubby in his teens. The family had 5 children, my mother Letty, the third child, was born in Palembang on Sumatra in 1925 and in 1929 the twins Beppie and Han followed.

Grandpa (bomb) Jagtman was a trader and born in Amsterdam.

Grandma (Moes) Jagtman, was a daughter of a Belgian and a native woman of Sumatra. Because Batavia offered better prospects of building up a business, the family moved to Batavia shortly after the birth of my mother in 1925.

As usual in better circles, the family employed numerous staff. It was quite normal for Indo-European and European families to provide paid employment for the local population. There was a Djongo (houseboy), a Kokkie (cook), a Baboe Tjoetji (laundress), a woman who did the ironing, a Kebon (gardener) and also a Sopir (driver). The children grew up in great luxury before the war.

This story is about the two eldest sons Edo and Clem. Before the war they enjoyed a carefree childhood. As soon as they got their school diploma, they joined grandpa's company.

Grandpa Jagtman had an agency and commission business. One of the many products he sold was Cassimis cigarettes. These were made in Egypt, but where Holland's best sold cigarettes because of their unsurpassed quality. I know this from an advertisement in the Bataviaasch Nieuwsblad of the 2nd of December 1930.

Grandpa Jagtman also brought the first Philips radio cabinets with record player to the Dutch East Indies. He died in Batavia on the 22nd of December 1940 at the age of fifty-one. He left behind his wife and five children.

His eldest son Edo took control of the business, but not for long because the war broke out.

On the 10th of January 1942 the Japanese army attacked the island of Tarakan, an island off the coast of Borneo (now Kalimantan) to capture the oil installations and airfields there. After the first fighting at sea, the Royal Dutch East Indies Army or the KNIL capitulated on the 8th of March 1942.

Edo was called up for military service on the16th of May 1934. He was conscripted into the rank of militia soldier in the 1st Howitzer Division (officially called the 1st Howitzer Artillery Battalion) in Weltevreden, a suburb of Batavia, under the command of Maj. Schmidtz. This is how it is recorded in the excerpt from his military documents.

Professional soldiers and conscripts were entered in these military document of the regiment to which they were assigned. These documents were established and maintained by all army units (in both the Netherlands and the former colonies), but not always fully preserved.

It was a hectic and chaotic time at the KNIL. On the 27th of October 1934, he went on great leave (great leave means the time during which the conscript is not on active duty or must be on active duty). However, in view of the increasing threat from expansionist Japan, he was called up again on the 4th of September 1939, after which he went on major leave again on the 23rd of September 1943. In the meantime he remained active in his father's company.

Meanwhile, war broke out in Europe. On the 12th of December 1941, Edo came under arms again during the general mobilization. As has happened to so many, he too was taken prisoner of war on the 8th of March 1942 in Tandjoer by the Japanese soldiers.

He ended up in Sukaboemi. That was an assembly camp and centrally located in West Java. In the months of May and June the camp was gradually evacuated. The prisoners of war were transferred to camps in Tjimahi. This camp was located in the northern part of Tjimahi. It was first a prisoner of war camp, and only at the end of January 1944 it became a civilian camp.

Camp Makassar was located in the far south of Batavia. About eight kilometres from Master Cornelis, a suburb of Batavia. That was not far from the highway to Buitenzorg. The prisoners of war were housed in barracks made of bamboo and encircled by barbed wire. This camp served as a labour camp to grow vegetables for various internment camps and to take care of pigs for the Japanese soldiers. The camp was popularly known as the Makassar Farm.

His brother Clem was also called up for military service on the 31st of May 1941. On the 30th of June 1941 he was promoted to Militia Sergeant. However, he was also taken prisoner of war in Bandung on the 8th of March 1942.

After that Uncle Edo and Uncle Clem were taken to Singapore with the Kinta Maru 3, also called the Java Party, to the River Valley Road Camp.

The Kinta Maru 3 (coaster, 1000 tons) left Batavia for Singapore on 15-1-1945 with 639 prisoners of war. The prisoners of war (117 English, 106 Australians, 8 Americans and 408 Dutch) were from the 10th Battalion in Batavia (some arrived shortly before from Kampong Makassar camp in Batavia). The journey lasted 3 days. This transport was referred to as Java Party 26, the 26th (and last) prisoner of war transport, which departed from Java. The Kinta Maru 3 is popularly referred to as one of the Japanese Hell ships.

The River Valley Road Camp was situated in a valley, on either side of a small river; the prisoners were divided up according to the nationality and stayed on either side of the river. The exact location is not (yet) known; the River Valley Road could not be found on the map. This camp was rather a camp for native refugees and was guarded by Japanese soldiers in the period I am talking about. They lived in dilapidated attap-huts (named after the attap palm), filled with mud and slept in 2 layers on top of each other. It is known that during 1942 the prisoners were put to work in the Singapore harbour in the storage sheds, transporting food supplies and later for loading and unloading ammunition (a.o. bombs of 125 and 250 kg).

Both my uncles were imprisoned here until August 1945. I did not find out whether both stayed in the same camps during the war. Uncle Clem and probably his brother were found and liberated in Tandjong Pagar, Singapore, on the 5th of September 1945.

After the Japanese capitulation, both my uncles were immediately rearmed. I was able to read that in their military documents.

This was customary and at that time nobody had  heard of PTSD (Posttraumatic Stress Disorder), so this was not taken into account either.

Uncle Clem joined the KNIL in Australia from Singapore. He joined the famous 18th Squadron.

It was not until the beginning of 1950 that the family was reunited in the Netherlands.

I don't know much about the repatriation itself, apart from the fact that grandmother and my mother Letty and Beppie travelled to the Netherlands separately. What year this was is also unknown to me and unfortunately, after the necessary research, I can't trace them on any repatriation list.

The only thing I do know is that Letty, my mother, and Beppie ended up in a city called Well, North Limburg and lived in boarding rooms with a teaching couple.. They both took courses at Schoevers in Venlo.

Of the three uncles, Edo, Clem and Han, Han left home and joined the Navy as a young boy. Edo went to The Hague, this must have been after 1950, but before 1952. Clem joined, the infamous 18th squadron in Australia as mentioned above and became Sgt Air Gunner. Afther this he  became a customs officer in 1950.

There is still so much to find out and this is a project which I do with my second cousin. We want to complete the family story for my nieces. As soon as that story is more advanced, I will probably post is on this website. 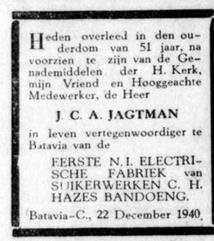 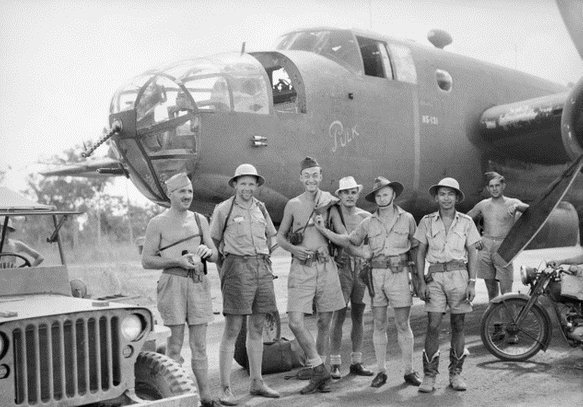 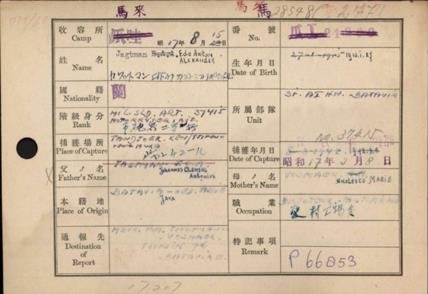 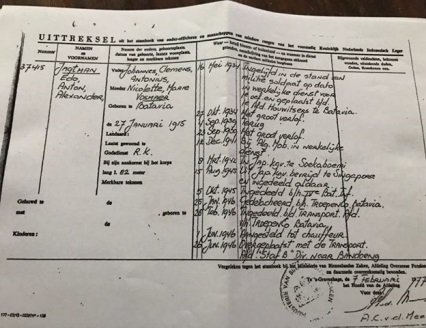 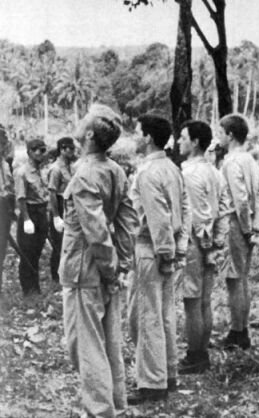 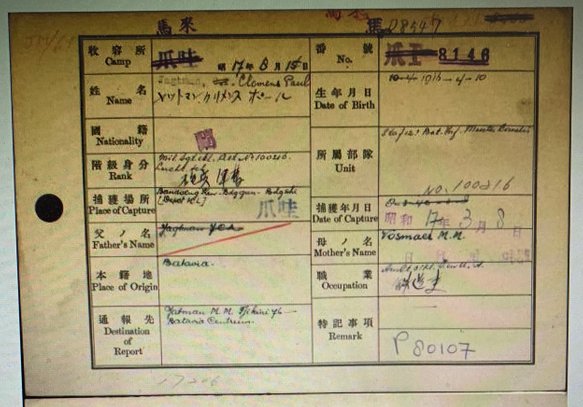 Rick Franke talks about his two uncles in the Dutch East Indies: 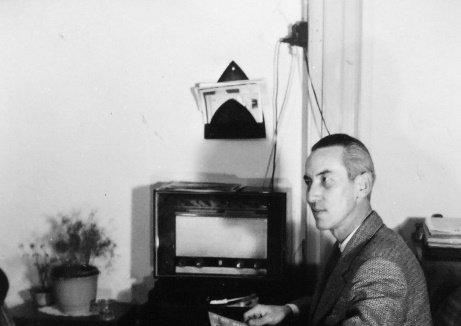 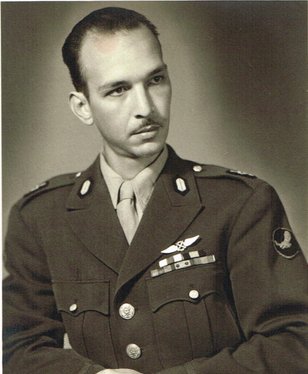 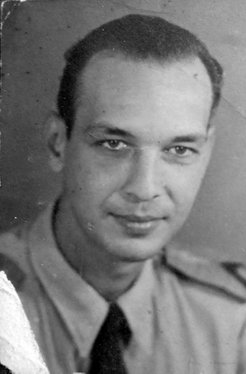