You wouldn't guess by looking at me with my blonde hair and green eyes, that there are three generations who lived in Java in my immediate family.

My mother was born in Bandung, the former Dutch East Indies, and this is her story:

The story begins on July 20, 1908, when my great-grandfather Willem Bakker, born in Amsterdam on May 22, 1887, volunteered to join the Dutch Army. He commits himself for10 years to the 11th Regiment Infantry as a soldier with service number 9194. A premium of 10 guilders will be paid for each year that he remains in actual service (note in the OMPF, official military personal file). Also a note is made and I quote "is afflicted withweakness of the right groin".

On 24 December of that year he is promoted to corporal.

The register shows that Willem was placed in reserve on 22 July 1910 and he married his Johanna, who was 4 years his senior, on 7 October 1910 in Nijmegen.

On 7 September 1912 their first child was born in Nijmegen, a daughter by the name of Albertina Johanna Geertruida. She was given the nickname Tine.

A transfer takes place on april 1, 1913 to the 22nd infantry regiment. Subsequently, he goes into actual service on 2 June 1914. After being placed in reserve once more, war breaks out in Europe on 28 July 1914, which will later be called the First World War or the Great War, but during which fortunately the Netherlands can remain neutral.

Willem is, however, placed in actual service on 1 August 1914, with the imminent mobilisation. Johanna is pregnant with her second child and gives birth on 17 November 1914 to a daughter named Geertruida Christina Johanna. She would be called Trudy for short..

On 28 March 1915 he was again promoted to sergeant and on 8 April 1916 he entered into a six-year engagement as sergeant of the 22nd infantry regiment with the Colonial Troops, both in and outside Europe, for which he received a bonus of 400 guilders.

Willem was not among the tallest on earth, measuring only 1,668m as registered, but he was nevertheless sent to the Dutch East Indies. On 21 June 1916 Willem and his battalion left Amsterdam on the ss Prinses Juliana of the Stoomvaart Maatschappij Nederland for Batavia via the Suez Canal.

Johanna and the two daughters also travel to the Dutch East Indies in 1916, whether this is with Willem is not known.

As far as is known, life in the  Indies is good and comes with a lot of conveniences. A request is made by Willem to be transferred to Bandung or Tjimahi and eventually they are housed in Bandung.

On 9 December 1921, the family grows and their son and last child Willem jr. is born. Willem Sr. was granted annual leave and he and the family returned from Batavia to Amsterdam on 12 May 1923 on the ss Jan Pieterszoon Coen, a journey that took one month and the ship arrived on 15 June 1923. On 20 October of that year the family travelled back from Rotterdam on the ss Tjerimai.

There is no reason to go back to the Netherlands and when the opportunity arises to re-enlist on 8 April 1922, Willem commits himself for another six years in the tropics and is appointed sergeant major of administrative services.

The three children grow up as real locals, but since there is no Indies blood flowingthrough their veins, they are seen as real totoks belonging to the elite of the colony.

The Indies story could have ended here, were it not for the fact that the eldest daughter Tine wanted to stay on Java.. She was only 14 years and 7 months old, but she was determined not to return with her father and mother to the Netherlands, although she had been born there. She felt senang in the Dutch East Indies and wanted to continue building her life there. Father and mother Bakker agreed, and that was also the reason why they did not return to the Netherlands definitively until 1928, when Tine had reached the age of 16. There was one major condition attached if Tine wanted to stay in the Dutch East Indies and that was to marry a Dutchman.

That Dutchman was found and that was Pieter Gerrit Ottema, nine years older than Tine, who also lived in Bandung and was the son of Nicolaas Johan Ottema (civil servant with the Dutch Railways) and Bertha de Mooij, born in Groningen on 21 November 1903. It is known that Pieter travelled on 12 January 1929 with the ss Tjerimai from Rotterdam to Batavia but it is not known whether this was the first trip to the Dutch East Indies.

My grandfather Pieter Ottema worked at Ford in Bandung and because of his good connection with Lorens cars was sent from the Netherlands to Bandung to work at Ford. He was a technical employee of the Ford sales department.

During the Japanese occupation grandma Tine, as a resident of Bandung, was  interned in the women's camp in Tjihapit almost immediately. It was the camp where Corry Vonk also had to spend the war. Grandpa, on the other hand, was put to work in the rice fields, about which not much is known. We do know that grandma risked her life to get tomatoes for the children in the camp, so they could get some healthy food.  After the Japanese surrender on 15 August 1945, both Tine and Pieter returned to their home in Bandung.

On February 10, 1946 great-grandmother Johanna Bakker-Smeman died in Nijmegen. I have not been able to find out when my great-grandfather died, but it must have been in Nijmegen as well.

Pieter and Tine lived in a beautiful house in Bandung at the Naripanweg 7 (nowadays J.L Naripan) where now a dancing school is established. My grandmother Tine had many miscarriages, partly probably due to the hardships of the war and partly due to the more primitive care in the hospitals during the terrible Bersiap period and its aftermath. When Tine became pregnant again, they decided to have the birth of the baby in the Netherlands, where the care was of a higher standard.

On January 15, 1947 Tine travelled from Tandjok Priok with the m.s. Sibajak to the Netherlands and arrived in Rotterdam on February 9, 1947. Pieter arrived a few months later because of his work and departed on May 19, 1947 with the s.s. Nieuw Holland from Batavia. The ship docked in Rotterdam on June 19, 1947 three days before the birth of their first daughter named Inge  on June 22, 1947.

The Dutch East Indies and the independence struggle came to an end at the end of 1949 and the independant state of Indonesia became a reality. The brand new family returned from annual leave with little Inge and Pieter resumed his work at Ford in Bandung.

On 17 March 1950 my mother Mady Ottema was born.The reason is unknown, but my mother's birth was not registered at the municipality and so there is no birth certificate. In 2019 I went back with my mother to Indonesia and in particular Bandung. Mum didn't know the name of the hospital where she was born so we couldn't find out any more information either.

Grandpa and grandma also lived in Lembang at some point but unfortunately I was not able to find any more information  about this.

For Indonesian Dutchmen (totoks, Indo's and others who do not want to become Indonesian) it is becoming increasingly difficult to stay in Indonesia. And while everyone in the Netherlands was happily unwrapping presents and eating gevulde speculaas on Sinterklaas evening (5 December 1957), the Sinterklaas celebration in Indonesia was surrounded by a black cloud.  This event would later become known as "Black Sinterklaas". And as if it were a Sinterklaas surprise, on that day the 50,000 Dutch people still living in Indonesia hear that they have to leave Indonesia as soon as possible, being declared officially undesirable aliens.So a relaxed party was out of the question.

Tension had been building up in Indonesia for a long time and hatred of the Dutch had been running high. Yet no one in the Dutch community had counted on having to leave. For Albertina, Inge and Mady their childhood and life in the Dutch East Indies/Indonesia came to an end when they said their final goodbyes and embarked on the ms Roma, which left Djakarta/Tandjong Priok on 8 January 1958 and arrived in Genoa on 30 January for the final leg, the train journey to the Netherlands. My mother remembers that she experienced the boat trip as very (positively) exciting and the bitter cold weather in the Netherlands. The family received shelter  in Budel in Brabant. *

Pieter who still had to tie up loose ends at his job at Ford followed a year later.

Grandma Tine died in 1978 at the age of 66 and unfortunately I never got to know her. My grandfather Pieter died in 1983.

* On the website of the National Archives we find the following passage concerning the crossing and passengers of the s.s Roma :

In January 1958, a dozen chartered ships set sail for the Netherlands. A lot of beds are needed and the Ministry of Defence makes 2000 beds available in the militairy shelter in the town of Budel. On 30 January, the ships 'Roma' and 'Himalaya' are expected in Rotterdam. The passengers will be taken to Budel. 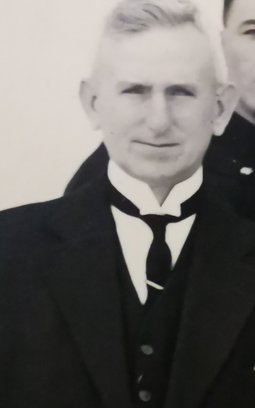 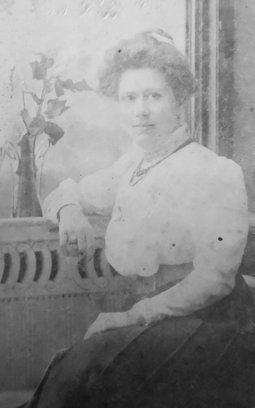 Grandma Albertina on arrival in the Dutch East Indies in 1916 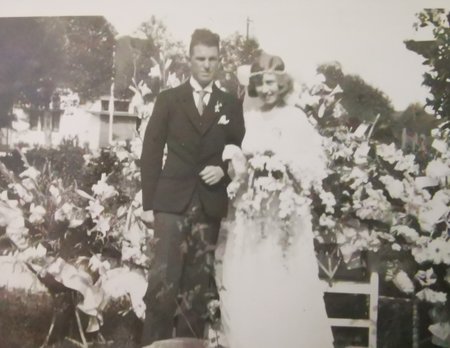 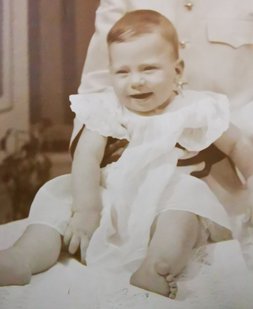 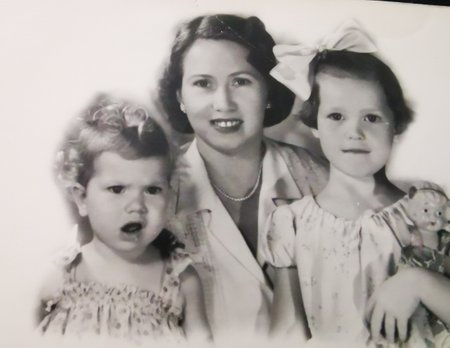 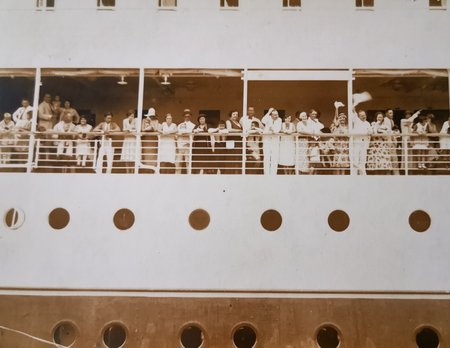 The last journey back to the Netherlands of my great-grandparents