Herman Sterken tells about his grandfather and uncle in

My grandfather Hermannus Holtrust was born on the 27th of May 1893 in Hasselt, Overijssel. He was a merchant, and agent for several trading companies.

My grandfather was the second son of Berend Jan Holtrust and was called Hermannus, just like his little brother who died at  a very young age. He has  special trading talents and does business all over the world. Before the Second World War this was in the Dutch colonies in the East and West Indies and then also in Japan and China.

Because of the extremely slow economy in the Netherlands jobs were hard to find so when he was offered a job in the tropics he seized it with both hands. Wages were much higher in the Dutch East Indies and for a possible later pension the years of working in the tropics were counted double.

This is how he started his tropical career in Batavia.

Grandfather Hermannus, after whom I am named, married my grandmother Aaltje Ditje on the 20th of November 1919. Aaltje Ditje Holtrust a niece of my grandfather, and therefore with the same surname, was born on the 15th of  August 1894 in Katwijk aan Zee.

To be married with the glove is a marriage ceremony in which one of the partners cannot be present and is replaced by a proxy.

It was a special ceremony in which a substitute on behalf of my grandfather took my grandmother's right hand, but wearing a glove. After this Aaltje, now a married woman, could make the big journey to the Dutch East Indies after which the couple could have their marriage confirmed in a church. A Ceremony that their daughter will go through some thirty years later.

Aaltje is the eldest daughter of Jannes Holtrust and Alida Christina Keulemans. The family has a total of 9 children, 5 daughters and 4 sons.  The eldest of the four sons is Mattheus Hermannus about which more is written below.

Aaltje travelled with the s.s. Tabanak on December 6th, 1919 from Rotterdam to Tandjong Priok, the harbor of Batavia where she arrived on January 10th, 1920. Grandfather was a trader in heart and soul and at various times in his life he had a vendu house. He advertised every week in several local newspapers and had his vendu house also sold a large variety  of  articles. I  remember that at one point I received toys from him that had been put up for sale in his vendu house.

On March 25th, 1921 a daughter was born in Batavia she was named Willemine Margien.

During the 6 yearly leave, to the Netherlands, another daughter was born in Katwijk on August 14th, 1922, who was named Alida Christina. On September 6th, 1924 daughter Bernardine Jeanne follows.

It must have been around 1926 that the Holtrust family moved with their three daughters to Medan, the capital of the island of Sumatra. Grandfather Hermannus became director of the N.V Deli Maatschappij.

The N.V. Deli Maatschappij is a Dutch company of colonial origin. Initially it was active with tobacco activities, but has divested these and nowadays it focuses on the trade in wood and building materials. The Deli Maatschappij was founded in 1869 by Jacob Nienhuys and Peter Wilhelm Janssen as a Tobacco Culture Company with a concession for the Sultanate of Delis in Sumatra, Dutch East Indies. In the Deli Maatschappij a 50% participation was made by the Nederlandsche Handelsmaatschappij.

The family is very content and Hermannus a very beloved and prominent figure in Medan.

On May 10th, 1928 the last daughter Jeannette Christina Herma, my mother, is born in Medan.

The family lived in the Dutch East Indies until the Second World War when the 4 daughters were sent to the Netherlands in 1935 to go to school there. In the period of time that my grandmother Aaltje returns to the Netherlands , this being earlier than my grandfather,  because of the climate, the children stay with their grandparents in Katwijk. Grandfather Hermannus comes back to the Netherlands shortly before the war breaks out.

Alida Christina married Marinus van de Kerke on the 14th of  May 1946.

My great-uncle, Mattheus Hermannus Holtrust, was born on April 20th, 1900 in Katwijk, South Holland. He studied at the HBS in Leiden and then went on to study to become a government official at the university. After his studies he started as a controller in the Dutch East Indies. First he starts his career in Borneo and later he stays on the smaller island of Flores after which he moves to Java.

During his leave abroad in 1936 he married Christina Jacoba Donner. Christina, nickname Christien, was born on March 22nd, 1900 in Amersfoort and daughter of a reformed minister.  Mattheus got to know her when she stayed with her family in Katwijk.

After their marriage the brand-new couple went back to Java where Mattheus eventually gets appointed as assistant president in Soerakarta (near Solo) on the island of Java.

An assistant president was in the Dutch East Indies the highest Dutch civil servant in a department (assistant residence) of the local government that fell under the Domestic Government (BB).

Some departments together formed a residence, headed by a resident. Above the resident was the governor general, who ruled the Dutch East Indies in the name of the king of the Netherlands. The assistant president worked together with the regent, an official elected by the Dutch government preferably from the members of local substantial families. He was indispensable to the assistant president, both because of his authority with the population and because of his knowledge. The regent was the highest civil servant of the Inlands Administration. (source Wikipedia)

When the Japanese invaded Java in 1942, he was interned like all government officials. Christien and the children were sent to women's camps.  At the end of the war and the liberation from the camp, Matthew's (as he was called) health  was in bad shape. Therefore, there is mumbling in the camp "it is the end for him". But fortunately he recovered completely and would live another 30 years.

After the war the reunification takes place in Batavia (Jakarta). After the reunification the family departs with the ship the "Tegelberg" to the Netherlands. Upon arrival the family moved in with Mattheus' mother. The mother, who became a widow a few months before their arrival, lives in the spacious parental home in Katwijk together with two of Mattheus' sisters. After the acclimatization in the Netherlands, the family will move to Oegstgeest where Christina died in 1973 at the age of 73 and Mattheus at the age of 76. 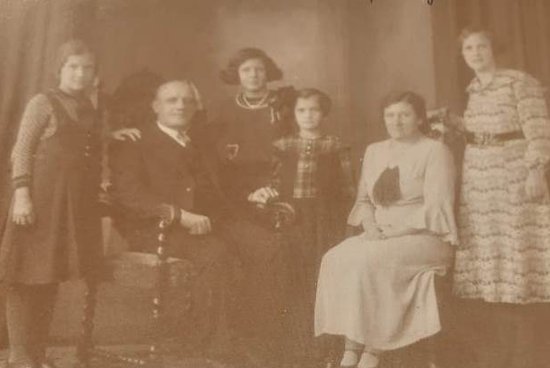 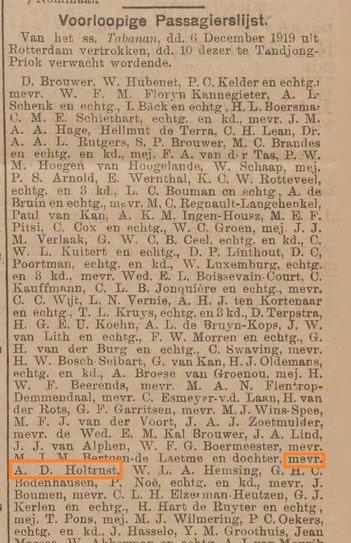 One of many advertisements of the vendu house of grandfather Hermannus

Passenger list s.s. Tabanan with the brand new Mrs. Holtrust on board 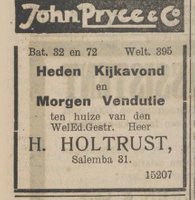 Appointment of my grandfather at the

Picture # 1: Headoffice of the NV Deli Maatschappij in Medan

Picture #2:  Employees of the NV Deli Maatschappij in Medan 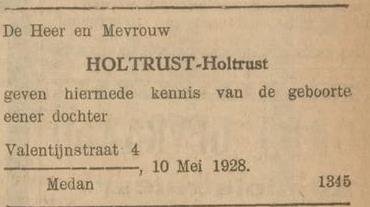 Birth announcement in the newspaper of my mother 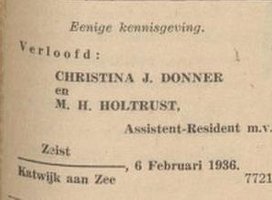 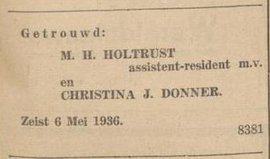 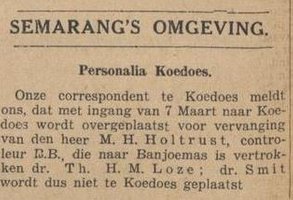