The story of my parents, William Robinson and

Currently, the independence, decolonization war (1945-1950) of the Netherlands in Indonesia is very topical.

Unfortunately, a skewed picture is now created because the KNIL (Royal Dutch East Indies Army) soldiers are accused of war crimes. It is understandable that this is a real slap in the face for many ex-KNIL soldiers and veterans. Finally, not everyone participated. The volunteers and conscripts were sent out by order of the then Dutch government, to bring Indonesia back under Dutch authority after the Japanese occupation, whereby in many cases violence was not shunned.

Unfortunately, my father also had to submit to this, in the many conversations I had with him, when he was still alive, he indicated that he fortunately did not have to take part in these terrible practices; he was a radio operator. "The story of my parents" gives a picture of how my parents spent the war after their forced departure from Indonesia in 1958, with me as a two-year-old boy. This story can be found in the Dutch book we published, "Waar komen Opa en Oma vandaan" (Where do grandpa and grandma come from) and since this week also in a short version on "the virtual  circle of stories".

The story of my parents, William (Wim) Robinson and Christiene Robinson-Hagenstein.

My parents and I left Indonesia in 1958 for reasons of survival, to    build a new life and future in the Netherlands.

My father is the son of  Wales Robinson from Tulunagung born on  23-3-1885 and  Rebecca Robinson.

Great-grandfather Thomas Alexander Robinson is a full-blood Englishman from Wales, and was married to his Chinese wife Sani Gwik, also called grandma Tjang.

Father was a prisoner of war in the Japanese camps, where he did not escape the cruel tortures of the Japanese, and was later also put to work on the infamous Burma railway, and survived all hardships.

The war had shaped and mentally hardened my father after everything he went through, it had left deep traces, which had repercussions on his family and his social life in the Netherlands until his death in 1996.

In November 1958 my parents and I left  ( a survival instinct) for the Netherlands. From Tanjung Priok, this is the northern part of Jakarta. We left on the Italian freighter Esperia, via the Suez Canal, Mediterranean Sea, with destination the Italian port of Genoa.

From Genoa, like many other returnees, we continued the journeyt by train to Arnhem station in the Netherlands.

Once we arrived in Arnhem, we were transported by bus to army camp Budel (Brabant) for our first welcoming.

This was in the cold winter of December 1958. After a short welcome, the families were divided over the various provinces in the Netherlands and housed in so-called contract pensions.

My parents and I ended up in a contract pension in Hilversum.

A new country, a new future, a few years we lived, like many other families on a 9 square metre room in a contract boarding house, was not what my parents had imagined life in the Netherlands would be.

Being treated as second class citizens, financially and socially poor and dependent, the disappointment was huge. There was no prospect of independent living for the time being, and  overcome by anger and frustration, they finally decided to emigrate to America. Just before severing all ties with the Netherlands, they were offered a home in Hilversum with a view of the beautiful heath.

The sixties were not easy for my parents, the death of my younger brother Stephen left a large scar and lots of sorrow.

Like many other returnees, my parents had to start life all over again, a decline in status, financial and social dependence made them very vulnerable.

In 1964 my sister Grace was born, father went to the Rijks Vakschool in Utrecht for a (compulsory) reskilling course, after which he found a job as a machine tool bench worker shortly afterwards.

Mother was taught, through a group of social workers, what Dutch cooking was like "how to make soup and stew".

Whenever it was financially convenient, occasional visits were made to explore the large cities such as Amsterdam and Utrecht. They did not have a social network and had to find out everything by themselves because they did not know anyone here in the Netherlands.

Repayment to the government of the costs of the crossing to the Netherlands, the care and an advance on a pocket and clothes money scheme, which my parents had to pay back to the last cent, weighed heavily on my parents' meagre income.

No matter how hard it was for them, they kept quiet about it and I never heard them complain.. 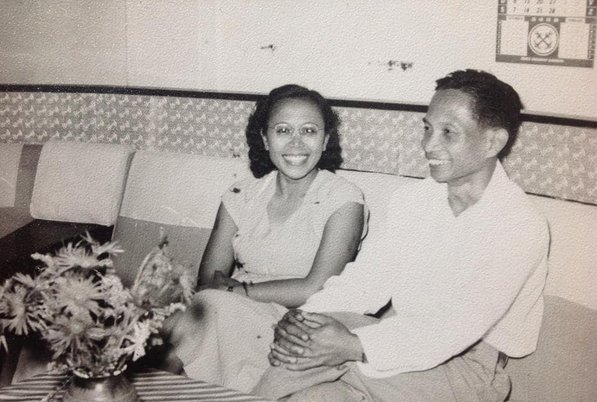 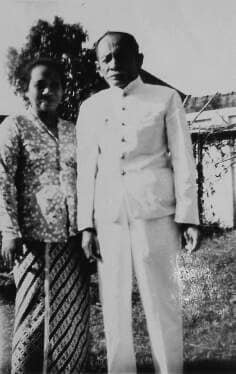 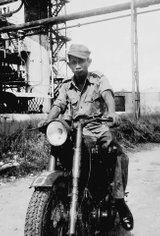 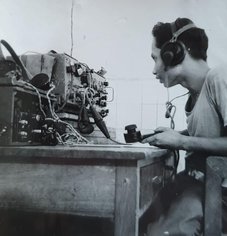 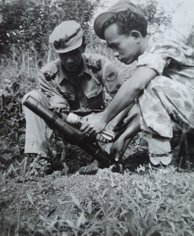 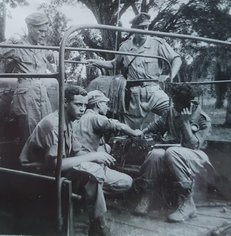 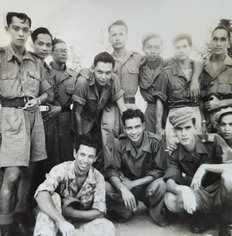 Harbour of Tanjung Priok bron wikipedia
The Italian freighter Esperia in the port of Genoa 1958
With mother and I on the deck of the Esperia in the Suez Canal
After a long journey we arrived in Holland with just one suitcase
My mother with me on her arm
Father and mother, gran and me in our room in the contract guesthouse