In the period 1945-1964 there was a large-scale (r)emigration of Dutch East Indies. More than 300,000 (Indian) Dutch came to the Netherlands from the former Dutch East Indies and later Indonesia. This migration is known as 'repatriation', which means 'returning to the fatherland', and should therefore be understood primarily symbolically, since a large proportion of the returnees had never been to the Netherlands before.

Japan had capitulated, but because there was no Allied force in sight, there was a power vacuum. This resulted in an extremely explosive situation; there followed a domestic attempt to settle accounts with all foreign influence, whether British, Chinese, Japanese or (Indian) Dutch. This period was very violent with tens of thousands of victims and is known as the Bersiap.

Because the situation for (Indo) Dutch people in the Dutch East Indies immediately after the Japanese capitulation and in Indonesia in the 1950s, after the 'war of independence', remained hostile and dangerous, their official functions were taken away from them and their possessions confiscated, most of them were forced to repatriate to their homeland, the Netherlands. They refused to opt for the warga negara Indonesia, Indonesian citizenship.

More or less in sync with these post-war developments, the departure from the Dutch East Indies/Indonesia also took place in five waves.

The first wave of returnees came to the Netherlands almost immediately after the Japanese capitulation and the Bersiap:

First wave (1945-1950): after the capitulation of Japan and the subsequent Bersiap, some 100,000 (Indian) Dutch people left for the Netherlands immediately or within a few years. They were mainly survivors of the Japanese occupation (1942-1945, both the so-called inner and outer campers) and the Bersiap. Initially, the intention was to stay in the Netherlands temporarily in order to recover from the Japanese occupation. Approximately 30,000 of them then returned to their beloved Indonesia;

Second Gulf (1950-1957): in connection with the transfer of sovereignty to Indonesia, officials from the administration, the police, the judiciary and the army repatriated to the Netherlands. After the dissolution of the KNIL in July 1950, many KNIL soldiers repatriated;

Third Wave (1957-1958): as a result of the New Guinea issue and 'Zwarte Sinterklaas' (Black Sinterklaas), which resulted in the (Indo) Dutch being declared enemies of the state in Indonesia, some 50,000 people left;

Fourth Wave (1962): in connection with the transfer of Dutch New Guinea to Indonesia, all Dutch citizens residing on New Guinea (approx. 14,000 people) were evacuated. During the period of the so-called UNTEA administration, a group of about 500 Papuans, who had been in Dutch administration, also came to the Netherlands with their families;

Fifth Wave (1957-1964): people who had opted for Indonesian citizenship after the transfer of sovereignty, but regretted their choice when the new Indonesian society began to treat them discriminately. Until 1958, Dutch admission policy was still very restrictive for them, but this was broadened due to the emergency situation in which the regrets had arisen due to political circumstances; some 25,000 of them were still able to come to the Netherlands and regain their Dutch nationality.

Repatriation of Indo-Europeans to the Netherlands was not encouraged, partly because of this. Many even found it difficult to settle in the Netherlands; requests for advance payment for a boat ticket were often refused (a single fourth-class passage cost around 1000 guilders in 1957). This attitude of the government caused these Indo-Europeasn to join forces.

In the years 1952-1955, the Dutch government put a brake on the arrival of (Indo) Dutch people, especially Indo-Europeans. This group, according to the government, could settle badly in the Netherlands and had to be protected from themselves. Only in very exceptional circumstances were these families allowed to come to the Netherlands. In order to do so, they had to submit an application to the High Commission.

In 1953, the Dutch High Commissioner in Indonesia, A. Th. Lamping, returned to his position, which he had taken in the Dutch media two years earlier, to the effect that the future of (Indo) Dutch people lay in Indonesia. Lamping argued this time for a relaxation of the possibilities for coming to the Netherlands.

The living conditions of (Indo) Dutch people in Indonesia became so problematic that the Dutch government decided in 1955 to adjust the repatriation criteria. As a result, late returnees and those with regrets came to the Netherlands in 1955. In the first instance, regrets and regrets were expressed, but on arrival in the Netherlands they opted for Dutch citizenship.

On 5 December 1957, Sukarno declared the last Dutch nationals still present in Indonesia (40,000 people) to be an enemy of the state and forced them to leave for good. Dutch companies were also nationalized by Indonesia and Sinterklaas was no longer welcome. It meant 'Don't unpack but pack'. The anti-Dutch actions are therefore also known as 'Black Sinterklaas'. It was the climax of years of hate sowing by Indonesian fanatics on the former Dutch overseas territory.

Nearly 40,000 (Indo) Dutch people left in the following months, while the economic ties between the two countries were almost completely severed. As a result, a group of another 10,000 came to the Netherlands in 1958. On 17 August 1960, fifteen years after the proclamation of Indonesian independence, diplomatic relations with the Netherlands were also severed.

Incidentally, not all Dutch people came back then (yet), especially (Indonesian) Dutch people who held key positions in the business community remained in Indonesia. In addition, a group of approximately 5,000 (Indonesian) Dutch citizens were left behind, who for various reasons were not allowed to repatriate to the Netherlands.

The arrival of Dutch nationals from the Dutch East Indies was not yet over. As a result of the loss of New Guinea in 1962, about 20,000 predominantly Dutch and Indo-Europeans left this last Dutch territory in the east. In 1968 the Dutch government definitively put an end to the arrangement for the arrival in the Netherlands.

Although the repatriation of the (Dutch East Indies) was known as a smooth move, there were sometimes connection problems. The vast majority of the returnees spoke excellent Dutch, but some of the children who came to the Netherlands in the 1960s had a language deficiency. In some Dutch cities, half of the children didn't even speak Dutch. The cause was the Indonesian ban on Dutch education from 1958.

Together with the group of (Indonesian) Dutch people, migrants also came to the Netherlands.

A special group in this period were the Moluccans, the peranakans and the stowaways.

Moluccans differed from the large group of returnees, because they had not chosen to come to the Netherlands themselves and assumed that they would only be in the Netherlands temporarily. They were KNIL soldiers who did not want to be demobilized on republican territory and the republican government objected to this happening in the Moluccas, because of the proclamation of the Moluccan republic RMS in April 1950. That is why the Dutch government decided to transfer some 12,500 Moluccans to the Netherlands in 1951. When they arrived there they were told that they were no longer employed by the army. They were interned in former concentration camps, such as Vught and Westerbork, then called Camp Schattenberg.

Peranakans ("child of the country") were Chinese who were born and raised in the Dutch East Indies or Indonesia. Some of this group also came to the Netherlands, but less often had European roots. Especially in the time after Suharto's coup this group feared for their lives. They were accused of communism and persecuted by the Suharto government.

They were there throughout the period of repatriation. For various reasons,the choose, to board the repatriation ships without papers. A number of stowaways, for example, had Indonesian nationality because their parents had chosen to do so, and could not qualify for Dutch nationality. They 'stowed away' because they feared for their lives. Others made this choice out of an adventurer's urge. In addition, as a result of the Suharto coup on 1 October 1985, Indonesians came to the Netherlands who, once they arrived here, allowed themselves to be naturalized.

The best-known group of stowaways are Mr. Samkalden's 70. In May 1958, after Black Sinterklaas, a record number of stowaways were aboard the Johan van Oldenbarnevelt. On arrival in the Netherlands they were arrested and placed in Camp Schattenberg.

Most of them were eligible for naturalization, but in October 1958 the then Minister of Justice, Mr Samkalden, decided that about 30 (37) of them had to return to Indonesia. They were put aboard the Johan van Oldenbarnevelt. Under great international pressure, the Dutch government decided that the group was not allowed to disembark in Indonesia, but on New Guinea. They ran the risk of being persecuted in Indonesia. Most of this group later came to the Netherlands, after the loss of New Guinea. 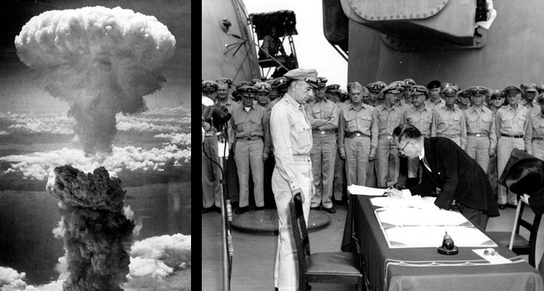 With the signing of the Japanese capitulation agreement, which took place on 2 September 1945 on board the American battleship USS Missouri, the Second World War officially ended. Officially, because the Japanese had stopped fighting on 15 August 1945 after the Soviet Union had declared war on the Land of the Rising Sun and after the Americans had dropped two atomic bombs on Hiroshima and Nagasaki. 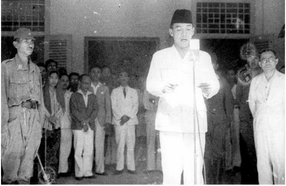 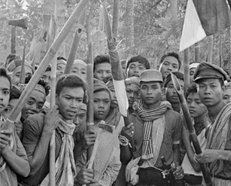 17 August 1945: Sukarno reads the declaration of independence of the Republic of Indonesia...the subsequent Bersiap was a very violent period. 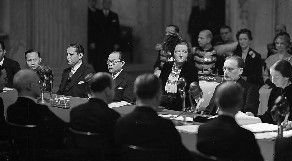 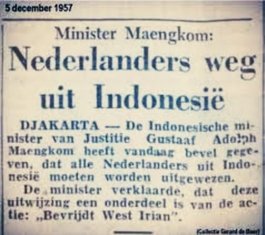